He’s been an ice cream van driver, worked in Harrods, got a band together, appeared in a pop video and been a stand-up comedian. And now he’s one of our comic heroes! The ninth book in Jonathan Meres’ best-selling World of Norm series – World of Norm: May Still Be Charged is out now and we’ve got an interview with the man himself.

What kind of books did you enjoy when you were growing up?

Define growing up? Because I think I still am! If you mean when I was a boy, then I mainly enjoyed books with pages in them. And words. And pictures. I loved Ladybird books. And bird books. And books about football. And annuals. Especially Blue Peter and Rupert annuals. Fiction-wise? Famous Five, Chronicles of Narnia, Charlotte’s Web. There just wasn’t the vast array of children’s books back then that there is now. Mind you, when I was a boy books had only just been invented.

What’s your favourite book of all time?

I’m really bad when it comes to favourite this, that and the other. Partly because I’m incredibly indecisive. But mainly because it often seems very unfair to single out just one type of cheese (or whatever) when there are so many other fantastic types of cheese (or whatever) to choose from. But right now? If I really HAD to choose just one book, it’s a book called On The Ball, by football legend George Best, signed to me, by him and the rest of Manchester United’s famous European Cup winning team of 1968. And I don’t even support Manchester United! 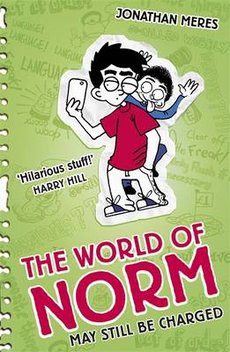 What made you want to be a writer?

Nothing made me be a writer. It just kind of happened. I didn’t ever plan to be a writer, or most of the things I’ve ever done for that matter. The only thing I did plan was to join the merchant navy after I left school. And that did actually happen. The rest? Being an ice cream van driver? Working in Harrods? Being an actor and a stand-up comedian? Writing for TV and radio? It’s all been a series of very fortunate events. And I guess it’s all culminated in what I’m doing now. Which as far as I’m concerned, is the best job I’ve ever had! I don’t think I was meant to be a writer, until my first book was published in 1998. I don’t think I would have been very good at it. Some people might not think I’m very good now! But I actually think I’m getting better. Then again, what do I know?

Do you have a favourite place to write?

As a children’s writer I’m contractually obliged to write in a ‘shed’ at the bottom of my garden, just like Roald Dahl did. Although it’s not actually a shed. It’s a really lovely wooden office with all my old books and toys and records in it. The only trouble is, I do tend to get a bit distracted by the view from my window. Ooh look, a squirrel. See what I mean?

What helps you write?

I probably shouldn’t say this, but coffee helps me write. (Just say no, kids. Drink herbal tea instead). And exercise definitely helps me write. So I go for lots of runs and walks and bike rides. Especially when the words aren’t flowing and I’m having a ‘bad day at the office.’ I absolutely love music. All kinds. But I can’t write whilst listening to it. I’ve tried, but I just end up focusing on the music instead of what I’m supposed to be doing. Even if it’s just instrumental music with no singing. It’s quite annoying actually. But probably for the best. Because if I could listen to music and write at the same time? I’d probably get even less work done than I do now!

World of Norm: May Still Be Charged is out now. Buy your copy today!