The Snowman Did It! By Sara Grant


Mackenzie and I were always in the wrong place at the right time. Or were we in the right place at the wrong time? Somehow we landed smack dab in the middle of danger no matter where in the world we went. You’d think we’d be safe spending Christmas at Grandma’s holiday home in Scotland…but nooooooo!

I stretched to tip toe on the highest rung of the ladder and flicked the final strand of neon blue lights around the top of the massive oak tree. Our Christmas decorations were going to be epic! From this height, I could see over the high fence and into the Gibson’s front garden. They’d built a perfectly proportioned snowman with three round balls perched on top of each other. No matter how hard I tried, my snowmen looked like snowblobs. The Gibson’s had gone all old school with big black button eyes and a carrot nose. Mackenzie told me that the scarf and hat were designer, and she would know. She loved all that expensive stuff.

Mackenzie in nothing but her leopard onesie bolted from the front door of Grandma’s house. The person she was chasing bashed into my ladder. I lunged for the tree and clung onto to the closest branch as the ladder crashed to the ground. Crack!

The branch and I were no longer attached to the tree, and I was falling. “AAAAAAHHHHHH!”

I’d like to say it was my supreme athletic skill – years of running and biking – that saved me, but even with the blood rushing to my head as I hung upside down, I knew it was dumb, stupid luck. I was not even sure how I did it, but one knee was bent around the tree’s lowest branch and the rest of me was dangling from it like a human icicle.

“Chase, come on!” Mackenzie shouted as she whizzed by me. “He’s getting away.”

I dropped to the ground and somersaulted to standing. I staggered after Mackenzie following her footprints in the deep snow. I passed the Gibson’s tall fence in time to see Mackenzie body slam the snowsuited figure to the ground.

“What are you doing?” I raced to her side.

“What?” I plopped on the guy’s back, using my best WWF matt-pinning move. I squashed him face first into the snow.

“I did no such thing.” Came a muffled voice under the hood of the snowsuit.

“He did it!” Mackenzie yelled and wrapped her arms around the guy’s kicking legs. “I saw him with my own two eyes.

“If my friend says you did it, you did it.” I removed the thief’s hood to reveal a mass of blonde curls tied with a purple ribbon. “Um, Mac, your he’s a she.” Doubt pinged in my gut. Maybe my genius friend was wrong after all. I hauled the girl to her feet, but kept my hand clamped tightly around her wrist. “Someone explain….something.”

The girl pinned her lips shut tightly and glared at me and Mackenzie.

“That’s Dorothea Gibson,” Mackenzie said, dusting the snow from of her leopard print. “Yesterday Ariadne showed me and Dorothea the engagement ring some sheik had given her.”

“It had a 1.54 carat diamond surrounded by a halo of diamonds set in white gold.” Mackenzie sounded like someone off a cheesy TV shopping channel.

“Grandma was never married to a sheik, was she?” I blurted. I’d only recently met Ariadne Sinclair, my mom’s mom. She had four ex-husbands that I knew of.

“That’s not important right now,” Mackenzie said, her cheeks rosy from running, the below freezing temperature and my silly question.

“While you were hanging fairy lights out here, and I was decorating the tree in the back lounge, she…” Mackenzie pointed dramatically at Dorothea, “waltzed into your grandma’s bedroom and stole the diamond from Ariadne’s jewellery box.”

I squinted at Mackenzie. Something wasn’t right about what she was saying. “I did not steal anything from Mrs Sinclair,” Dorothea said with a stomp of her snowboot. “I was looking for your grandma when this crazy girl came shrieking after me.”

“First of all,” Mackenzie flicked her halo of curly brown hair, “I don’t shriek.” Now I pinned my lips closed. I’d actually heard her shriek several times. To be fair, we were being attacked by eels in the Maldives and swept away by a runaway dogsled in the Arctic Circle.

“And secondly, I saw you steal the ring.” Mackenzie searched the pockets of her onesie. “I’m calling the police as soon as I find my phone.”

Then it hit me. I’d figured out what was bothering me. “How could you have seen Dorothea steal the ring if you were at the back of the house and Dorothea was in the front in Grandma’s bedroom?”

“That’s right!” Dorothea said. “You can search me. I don’t have the ring.” Dorothea held up her hands. I kept right on holding on to her wrist. I couldn’t risk letting this maybe-criminal get away. She spread her fingers wide to show she had nothing to hide.

Mackenzie expertly patted down every inch of Dorothea as if she was a chocoholic scavenging for the last M&M. “Ariadne had me install surveillance cameras all over the house. I saw everything on my iPad.”

“Then where’s the diamond,” Dorothea said and smiled this really mean-girl smile – the one that says that she knows she’s right and we’re stupid. Argh! I hate that kind of smile.

Mackenzie was feeling around in the top of Dorothea’s boots. “Stop that.” Dorothea giggled. “You’re tickling me.”

“Anything?” I asked Mackenzie after she’d checked the snow all around us and even under our feet.

Mackenzie shook her head. “She probably tossed it before I caught her.” We both scanned the crumpled blanket of white. If the snow had been fresh, we might have been able to see the hole where she dropped it.

“It could be anywhere,” I said, searching for a diamond’s sparkle in the mushy mounds of snow left from our chase and the Gibson’s snowman making. If only the snowman could talk… The poor guy’s head had rolled off. Both of his button eyes had popped out, but his carrot nose pointed straight up.

“You hold her,” I said. Mackenzie did as I asked without hesitation. I found my phone, pointed it at Dorothea and started filming. “It’s the twenty-fourth of December and this is the confession of Dorothea Gibson.”

“What?!” I flicked the phone to capture Mackenzie’s confused expression.

I could prove that Mackenzie was right and Dorothea was guilty. I removed the carrot nose from the snowman. “The carat is behind the carrot.” I showed the camera Grandma’s ring and then zoomed in on Dorothea.

“How did you know where I hid the ring?” Dorothea clapped her gloved hands over her mouth.

“I saw the Gibson’s perfect snowman from the ladder right before you ran,” I explained. “You were the only one who could have decapitated the snowman. The snowman’s eyes popped out when the head hit the ground so there’s no way the carrot could still be standing perfectly straight. It is obvious you replaced the carrot after the fall to hide the ring.”

I switched off the camera and dialled the police.

“I guess you could say the snowman gave you away!” Mackenzie said, and we both burst out laughing.

Discover Chase and Mackenzie’s first adventure set in the Maldives in Chasing Danger. When modern-day pirates attack the island, it’s up to Chase and Mackenzie to outrun, out-think and outfight the pirates . . . before it’s too late! 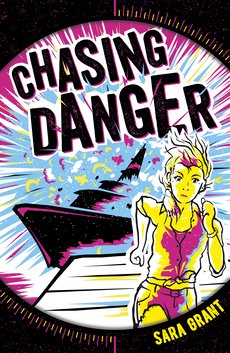 Or solve a whodunit with Chase and Mackenzie in the Arctic Circle in Mystery at the Ice Hotel. 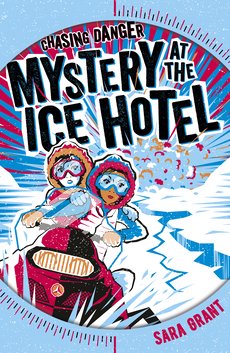