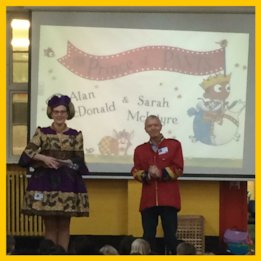 Last week we sent Lollies nominated author Alan Macdonald and illustrator Sarah McIntyre, creators of The Prince of Pants, to Chestnuts Primary School who won the visit by buying a Lollies book pack. Here’s what they got up to!

The first thing they did was sing their iconic pants song! ‘Pants, pants, glorious pants, there’s nothing quite like it for making you dance.’ They taught the students the chorus, Sarah played her ukulele and everyone sang along. 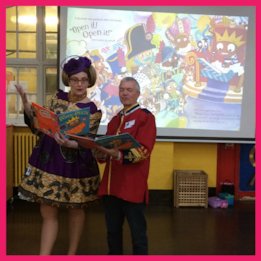 Then Sarah and Alan read The Prince of Pants to everyone with giant slides behind them showing the illustrations. Everyone had fun trying to spot the hidden pants in Sarah’s drawings including pants in place of a kite and pants worn as a hat!

Alan also had some fantastic voices for the different characters and there were howls of laughter when he read out the Queen’s lines. 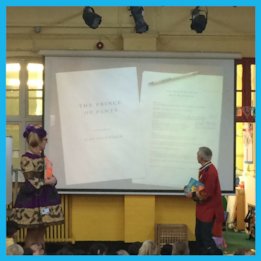 After the book was read, Sarah and Alan told us how they made it. First Alan wrote the story on a regular piece of paper with no drawings or pictures. His inspiration, he said, was that pants are funny and he liked the idea of someone who had a huge collection of them.

Sarah received the story and started drafting some pictures. She wanted the Prince to always look like he was running about somewhere and she particularly loved drawing the Queen’s corgis. She refined these drawings until she drew the final versions then painted them with watercolours. 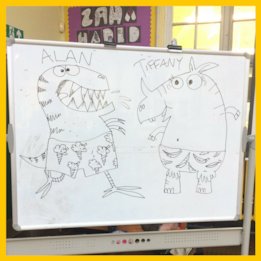 Both agreed that the best part was when the finished book arrived at their door!

Sarah showed us how to draw some incredible creatures. She started with a pair of pants and the children then suggested animals to go in them. Meet Alan, A dinosaur-chicken in some ice cream cone pants and Tiffany, a rhino-elephant in banana pants.

The pupils were then given some drawings of pants for them to fill in with their own designs and colours. Sarah said that the most important thing with drawing was to be imaginative and creative. 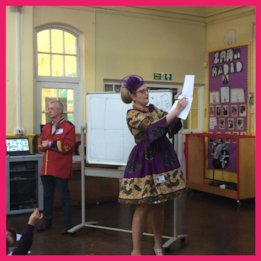 Sarah and Alan taught the older pupils how to make their own book with a piece of paper. This paper was folded into four parts for four parts of the story,

The children started their stories which were all themed around an item of clothing just like The Prince of Pants. Once the first part was complete they passed their story onto the person sat next to them for them to enter the next part of the story. The end result was a finished book with different authors!

Everyone had a fantastic time at the event and Sarah and Alan were very busy signing autographs in the library after! Sarah drew a picture of her and Alan for the school to keep to remember this pantastic day.