Sophie McKenzie is an award winning author of books for children, teenagers and adults. After growing up in London and going to university, Sophie became a journalist before doing a year-long course on writing for children. Her first book was published in 2005 and since then the number has risen to over 25. 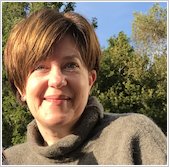 When did you first read Little Women and what impact did it have on you?
I think I probably read Little Women for the first time when I was about 11 and it immediately became one of my favourite books ever. I’m very close to my brother but growing up I really wished I was part of a big family with lots of sisters. The girls in Little Women drew me into their world and for the time it took me to read their story, I was living and breathing their lives with them.

Why do you think Little Women has become such a timeless much-loved classic?
Probably because so many other people respond to the book in the same way I did! It may be set in a time and country far away from our own experiences but the power of the writing – especially the depiction of the four sisters and the relationships between them – has a truly universal appeal.

Which of the March sisters would you be and why?
It has to be Jo. From her opening grumble on page one Jo is at the heart of the experience of reading Little Women. I consciously related to her more than any other fictional character I’ve ever read: like me as a girl, she lives for stories – reading them and writing them. Also like me, she is clumsy and feels awkwardly uninterested in ‘girly’ things like ‘clothes’ and ‘boys’. She’s passionate and impulsive, often rushing into things too fast and unintentionally causing upset and offence. She’s quick-witted and articulate, so often appears more confident than she feels, but she has a kind heart and is loving and loyal.

Why did you want to bring the March sisters’ story into the present day?
I’ve never seen myself as a historical writer – almost all my books are set in contemporary Britain – so the present day seemed a natural fit for Becoming Jo. I also thought it would be interesting to explore which aspects of Little Women could be translated naturally and seamlessly into the 21st century, and which would need to be carefully adapted for today’s readers.

Were there any particular characters or themes from Little Women that you wanted to explore more with Becoming Jo?
There were definitely aspects of the book, following on from the previous question, that I knew I needed to approach very differently. For example, I didn’t want Meg to fall in love with Laurie’s tutor, which would have felt extremely inappropriate to today’s readers. However, I wanted to keep the tension that exists between Meg and Jo over the issue and frame it in terms of female identity. In Becoming Jo, the sisters fall out not because Meg is interested in a man, but because she doesn’t make the school/career choices that Jo thinks she should. Likewise, I wanted to find a modern way of showing Laurie’s loneliness. In Little Women he has a horribly sad background with both parents dead. A way of honouring this – while also giving my new story a more contemporary feel, was to make him Iraqi child refugee, Lateef.

Any tips for aspiring authors?
I’d say the best advice would be to do what Jo March does in Little Women: Read a lot. Write a lot. And don’t give up! 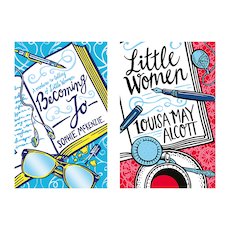 Buy Becoming Jo with a free copy of Little Women