Welcome back to our author Q&As! This month we’re welcoming Alexandra Sheppard, author of Oh My Gods.

Alexandra Sheppard is a social media strategist by day and writer by night. She was born and raised in North London, where she still lives and hopes never to leave. Oh My Gods is her debut novel.

What inspired you to write Oh My Gods?
Oh My Gods was inspired by a comedy-musical from 1946 called “Down to Earth” – my sisters and I watched it with my mum one Sunday afternoon, back when families typically had one TV per household so were forced to spend time together (ahh, the noughties). The film starred Rita Hayworth as a Greek muse, who, after finding out that a Broadway producer is about to spoof Greek mythology in his next play, comes down to earth disguised as a mortal actress in order to intervene. The film, truth be told, is forgettable. But the idea of Greek gods on earth has stuck with me ever since. This idea, combined with my evergreen love of angst-filled teen confessionals, was the source for Oh My Gods.

Have you always been interested in Greek mythology? What’s your favourite myth?
I’ve been interested in myths, folklore and legends for as long as I can remember – Indian, Egyptian and Caribbean stories are amongst my favourites. But Greek mythology’s impact is unrivalled, and the stories were constantly repackaged throughout my childhood. From Disney’s Hercules (yaaaas, gospel-singing goddess babes!) to Percy Jackson, I couldn’t get enough of the retellings.
My favourite myth? It’s impossible to choose just one. But the myth that I first remember reading over and over again is the story of Arachne, the skilled weaver who was turned into a spider by the jealous goddess Athena – and condemned to weave forever! It’s a creative origin story combined with vengeful, petty behaviour. I love it.

If you could be the Greek god/goddess of anything, what would you be?
I’d be the Goddess of Travel. I know it sounds dull, but hear me out. Seeing new places is my favourite way to spend time but I cannot stand long journeys. I get car sick, trains are expensive and airports are a special type of hell. Imagine being able to cut all of that out by, I dunno, teleporting or whatever? It would save time, money and boredom. I wish more than anything it could come true.

What were your favourite books growing up?
I loved teen diaries like The Princess Diaries, I Capture The Castle and The Secret Diary of Adrian Mole. The Confessions of Georgia Nicolson series made me and my friends weep with laughter. Despite being an avid reader, books by Malorie Blackman and Zadie Smith were the first time I read black British women in literature. And I loved vampire stories like Dracula and Blood Sinister, which was set in Highgate Cemetery – minutes from where I grew up.

If you could tell your teenage self anything, what would it be?
The world won’t end if someone dislikes you. When I was a teen (and well into my twenties, if I’m being honest), I couldn’t bear the thought of someone disliking me. It would stop me from speaking my mind, expressing my true thoughts and generally being myself. Now, I care a good deal less. It’s so liberating. Try it. 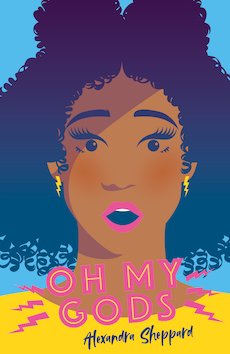