Time to listen to teens on language learning

For far too long it seems that media columns have been filled with reports of declining interest of British teenagers in modern foreign languages (MFL).

Take the figures published last summer. The number of children studying French to A-level has fallen by around 50 per cent in eight years to fewer than 10,000. Only around 3,800 youngsters took German. There was also a fall in those studying Spanish, which had previously bucked the anti-languages drift.

The government replied that it has been encouraging pupils to take languages, mainly through the English Baccalaureate – the wrap-around qualification which requires pupils to sit a range of certain GCSEs including a language.

But the problems don’t end there. More university language departments are facing closure if student recruitment continues to decline, and the key problem facing language courses is the drop in the number of students sitting the relevant A-levels that are required for entry. And there is a shortage of MFL teachers.

This ought to worry us – even more so as we head towards Brexit. It has been estimated by the All-Party Parliamentary Group on Modern Languages that our failure to communicate in anything other than English costs Britain up to £50 billion a year in lost trade. Declining numbers of MFL students have led to calls for a joined up strategy where the full contribution of languages to the economy and society is realised, with the National Association of Head Teachers particularly vocal.

New research published by Mary Glasgow Magazines, part of Scholastic’s education group, supports this move. Our survey of 101 secondary schools asked language teachers how important they thought the Department for Education (DfE) sees MFL in schools on a scale of 0-10 – with the average response being just 5/10. When asked how important the DfE should see MFL in schools the response rose to 9/10. 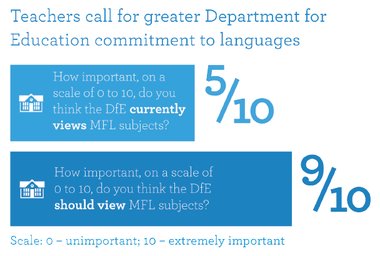 Respondents said the main reasons to learn a language in school was to develop pupils’ understanding of cultural practices (77%), build pupils’ interpersonal skills (74%) and to establish a path for lifelong learning (61%). 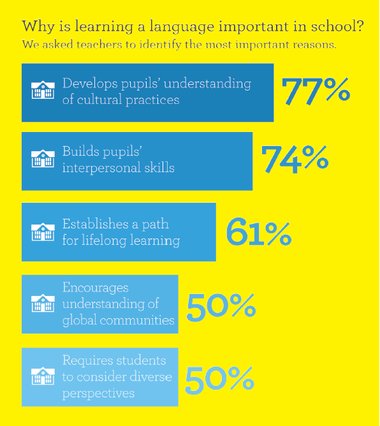 Yet 55% of teachers said they were concerned about the take up of MFL courses at Key Stage 4, despite 83% of schools surveyed offering such courses at GCSE. And 86.5% reported that less than 25% of their students take language courses at A-level. Overall, 98% of schools offered French, 81% Spanish and 47.5% German.

The survey clearly reflects that teachers recognise the need for understanding of other cultures and communication across country barriers. Therefore the steep decline in the number of pupils in this country taking French, German and Spanish should concern us all. Language learning, as well as being rewarding in itself, is hugely valued by employers as global communication becomes the norm.

Personally, I have worked in exports and I speak Italian, so I know first-hand the importance of cultural sensitivity in selling to people overseas. Even if you can’t learn every language of the countries that you are operating in, learning just one language opens your mind to dealing with people from different cultures.

At Mary Glasgow Magazines, we’ve been very effective in engaging young people in language learning; our magazines and online resources are a way of connecting teenagers to the real lives of their counterparts across the world and bringing other cultures vividly to life in a way that excites teens. It’s critical to be in touch with young people on languages. We need to spell out the advantages to them. We need to change parent perceptions about languages. Even if it isn’t a core curriculum subject, everyone needs to understand that learning a language does have a big influence in life and career choices.

For me, going forward, the real question on language learning is around who is really asking teenagers what interests them about languages. My own view is that question is not being explored right now at a policy level and we can’t rely on time-pressed teachers to do that either. We can provide organisations interested in championing languages with easy access to the thousands of students we work with to capture their views, test ideas, and ensure they are part of the discussion going forward.

We are proud to be celebrating our 60th anniversary, and continue to publish 17 magazines aimed at secondary school language learners around the world specialising in French, German, Spanish and English as a foreign language in 45 countries.